Yesterday it was announced that the Dalai Lama was retiring, more specifically, stepping down as Tibet's political leader. We talked to Robert Thurman, president of the Tibet House here in New York, about what this really means. This is a unique situation and Thurman tells us to keep in mind there is a difference between "succession" of a political leadership role moving from a spiritual leader to an elected leader, and "succession" of a reincarnating lama by dying and being found again after subsequent rebirth in another family. 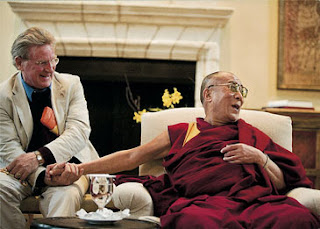 I was wondering if you could explain what this retirement means for the Tibetan people. It makes them very anxious, though they are aware that he wants them to take responsibility for the democratic exercise of their citizen's duties. He is only giving up political decision making—he is still there in a moral leadership role, and in spiritual role.

Who will now succeed him? The government in exile has a constitution that vests authority in elected representatives. An elected prime minister will take ultimate responsibility for political decisions, in consultation with cabinet and assembly.

And is this the first time a Buddhist leader has stepped down? He was a unique case of a Buddhist spiritual leader also being a head of state, since the founding of the Dalai Lama government in 1642. So there is no spiritual leader succeeding him, since the Tibetans have created a secular democratic state in exile, to be imported back into Tibet when the time comes.

I read that China maintained that it was not for the Dalai Lama to decide about his own successor, including any possible abolition of the institution. This has to do with the reincarnation of the spiritual teacher line of enlightened Dalai Lamas. Dalai Lama's 1 through 4 had no political power, were merely reincarnate lamas who served as heads of monastic universities and spiritual teachers. The Chinese communists, who do not believe in reincarnation, insisted that they would recognize reincarnations. They began this with the Panchen Lama, who was recognized by the Dalai Lama in the 90s, after which the PRC government abducted and imprisoned him and his family, and then they appointed the child of a party official as the Panchen Lama. Almost none of the Tibetans respect that appointed Lama and he is clearly just a puppet of the state.

Is it possible he will not be able to retire? It is possible that in the future, after the 14th Dalai Lama passes and the Fifteenth is found in exile or by the proper Tibetan religious authorities, that the Tibetan people will make an effort to ask him to sertve as the ceremonial head of state, though it is doubtful the reincarnation will agree, as he will remember (or learn about) his previous incarnation's determination to develop Tibetan democracy and a secular Tibetan government.

In sum, this announcement by the Dalai Lama is not new news, in that he has made the statement about retiring from politics and the Tibetans' need for democratic decision making, often in recent years, beginning in the 60s. What is perhaps new is the formality of this statement at the time of the election of the new Prime Minister.

Contact the author of this article or email tips@gothamist.com with further questions, comments or tips.
Posted by Geoff at 08:22